The road to a responsible and quick recovery is now before us.

As Congress returns to Washington this week, lawmakers on Capitol Hill are grappling with the same question on the minds of most Americans: Where do we go from here? Having already passed four rounds of COVID-19 relief legislation, they must now decide on our next course of action as the country looks to turn from crisis to recovery.

Gauging the headlines, the road ahead might seem impassable.

Beyond the staggering human toll, the coronavirus has left a devastating trail of economic destruction in its wake—and its impact continues to spread. Before the pandemic swept the globe, America was sliding into a deepening infrastructure crisis, but COVID-19 has now brought it full bore:

As state transportation budgets run dry, the federal Highway Trust Fund hurtles toward insolvency. Thousands of jobs across the country, tied to urgent infrastructure projects in crucial battleground states, are now on the chopping block.

It’s challenging to spot silver linings amid a global pandemic, but if there’s something working Americans can be grateful for during lockdown, it’s a reprieve from the wretched traffic that’s plagued daily commutes for years. But what happens when life returns to a new normal? America’s sagging roads and cracking bridges will still be there, causing the bottlenecks and accidents that are the signature of everyday gridlock:

Whatever the future holds, it’s clear we can no longer rely on yesterday’s roads to get us there.

What if there was a smart way forward that finds common ground? What if we could jumpstart our economy, putting hundreds of thousands of Americans back to work in good-paying, private sector jobs—without adding another dime to the deficit? What if we could capitalize on this this rare moment in the global oil market—paying dividends to working Americans for decades to come?

There is. And we can. All that’s needed now is the political courage to get there.

President Trump has never lost sight of his big and bold vision to revitalize America’s degraded infrastructure – a cornerstone of his 2016 campaign. Speaker Pelosi has made rebuilding roads and bridges a top priority for her caucus, signaling she’s ready to work with Treasury Secretary Mnuchin on a plan. And Leader McConnell has wisely insisted any infrastructure package be fully paid for.

With interest rates for the United States being at ZERO, this is the time to do our decades long awaited Infrastructure Bill. It should be VERY BIG & BOLD, Two Trillion Dollars, and be focused solely on jobs and rebuilding the once great infrastructure of our Country! Phase 4

Weakened and damaged infrastructure impacts every American. House Democrats work #ForThePeople and believe it’s time we #RebuildAmerica to ensure the airports, bridges and roads we rely on are safe and strong. pic.twitter.com/HU58Fbhge2

Truckers agree with all three. Where pundits see conflict, we see alignment—and the way forward. In one package, infrastructure offers a singular solution to the tangled web of policy challenges woven by COVID-19:

While the COVID-19 crisis will pass, one of its lasting legacies has already been written. We’ve managed to pile $3 trillion onto our nation’s credit card bill in a matter of weeks. These actions were necessary to prevent a catastrophic economic collapse, but their steep cost will reverberate for many years to come.

America’s total national debt now tops $25 trillion – another crisis decades in the making. It’s a heavy price dropped on our kids and grandkids, which they'll pay throughout their lives in the form of higher taxes and fewer economic opportunities.

Moreover, an infrastructure bill without a dedicated funding stream has no teeth. Without budget certainty over a multi-year window, transportation officials can’t move projects from the planning phase to the construction phase. Ground can’t be broken, jobs are frozen and any progress is bogged down by Congress’ annual appropriations cycle.

In order to create value, infrastructure has to be funded. President Reagan knew how to do it. And like never before, the time to do it is now.

Capitalizing on this Moment

Reagan twice oversaw increases in the federal fuel tax during his Presidency, and for good reason. It’s the most conservative, efficient and viable funding mechanism readily available for infrastructure improvements. That’s as true today as it was back then.

That’s because the fuel tax is collected at the wholesale level – at what’s known as a “terminal rack” – well before it reaches the retail pump. There are roughly 1,300 racks across the country, but collectively they’re operated by only 300 entities. The result is a tried-and-true system that minimizes overhead costs and maximizes efficiency – value – for road users. Ninety-nine cents of every dollar collected flows straight into the Highway Trust Fund. Compare that to alternatives like tolling, where as much as 35 cents of every dollar is squandered on administrative and collection costs. 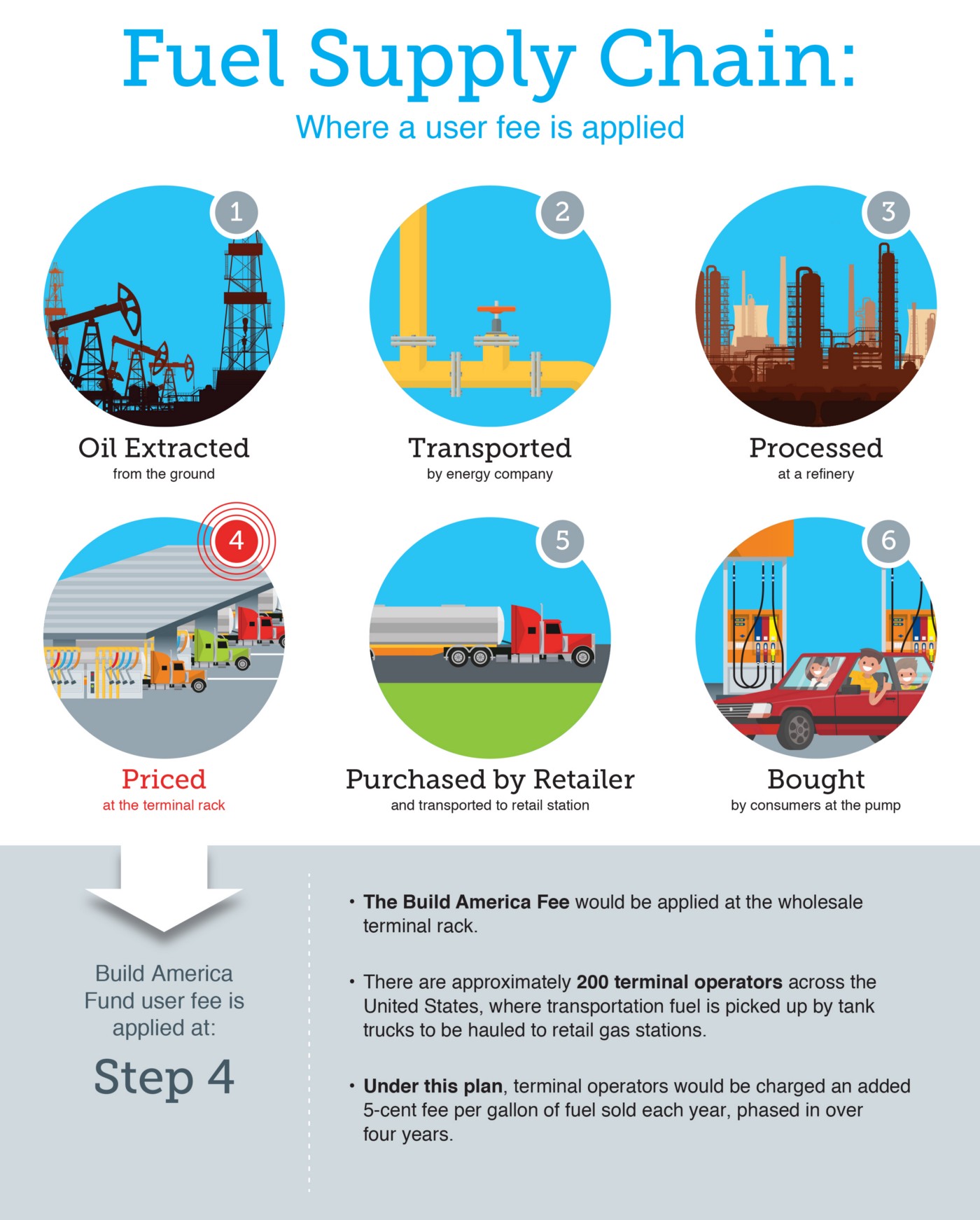 Yet Congress hasn’t adjusted the fuel tax since 1993. Make no mistake—when government fails to fund infrastructure, it’s the motoring public who pays: the typical motorist now loses $1,600 every year in wages, gas and vehicle repairs because of poor road conditions and the traffic congestion they create.

As COVID-19 roils oil markets, the present moment offers an enormous investment opportunity to recoup the economic losses inflicted on our country. As of May 8, the national average price for a gallon of gas is $1.82, compared to $2.88 one year ago.

With prices now at historic lows to protect consumers, increasing the federal fuel tax by only a nickel each year, over four years, would generate $340 billion in new revenue over the next decade. A five-cent increase in the fuel tax would cost the average motorist merely an extra 50 cents at the pump each week. Even if a 20-cent increase was phased in immediately, motorists today would still be paying 80 cents less on each gallon of gas than they were a year ago because of COVID-19’s effect on oil markets.

More importantly, well-maintained and responsibly funded surface transportation would realize significant savings for motorists by steadily reducing the $1,600 and 54 hours they’re currently losing every year as roads and bridges fall deeper into disrepair.

“We’re all in this together,” is a common refrain heard as we confront one of history’s greatest challenges. Truckers have helped carry America through this crisis, and we’ll continue to lead as our country emerges out of it.

When it comes to funding the roads and bridges that Americans use every day, the trucking industry more than carries its weight—and we’re proud of the fact. While trucks account for only four percent of vehicles on our nation’s roads, we pay nearly half of all Highway Trust Fund user fees. And we’re willing to pay more to get this job done.

But we’re not alone. America’s farmers, manufacturers, building trades, steel workers, business and labor leaders all stand in unison behind this national goal. Together we can rebuild America—faster, better and stronger than ever before.

So the question for Congress becomes: Are you with us?