A Trial Lawyer and a Conman Walk into a Burger King

It reads like a sleazy, made-for-TV crime drama. One might mistake it for an episode of Better Call Saul:

Inside a New Orleans Burger King, a personal injury lawyer and a scam artist rendezvous to plot their next move. On the back of a greasy napkin, the two masterminds sketch out a get-rich-quick scheme, involving orchestrated highway accidents and unwitting 18-wheelers, phantom injuries and large-sum lawsuits.

Watch the scam in action.

The conman, Damian LaBeaud, would recruit a network of co-conspirators to play the role of “victim.” Acting as wheelman, he’d deliberately crash their cars into the back or side of a tractor-trailer—and then quickly exit the vehicle to allow its actual owner to get behind the wheel. LaBeaud would stay on the scene, however, to provide false witness and file a police report that puts the unsuspecting truck driver at fault.

For his part, the lawyer would front each “victim” $7,500 to participate in the scheme. He'd enlist the services of a compliant doctor to perform neck or shoulder surgery on his clients after the “crash.” They’d get more money out of a lawsuit if they had surgery done, the lawyer explained. The payoff would come later in civil court: By suing each trucking company for as much as $1,000,000 in damages, they could maximize their profits in any out-of-court settlements.

As ludicrous as it all sounds, this was the making of a serious and complex criminal conspiracy, resulting in multiple staged accidents, spelled out in a ten-page federal indictment following an extensive FBI investigation. The scheme was not an isolated incident but one of many in a growing trend of insurance fraud rings targeting the trucking industry, which often employ entire teams of medical and legal stakeholders, as well as fake victims and spotters working together.

What’s empowering such brazen plots? How come their orchestrators feel assured in the high likelihood of a handsome payout, even when their concocted stories have no basis in truth or material fact? The fact is these criminal opportunists are merely one symptom of a much larger problem, and these questions are what lead us to the true story:

A civil litigation system that has spun wildly out of control—with costly consequences that are impacting far more than just truckers.

An Exponential Rise In Nuclear Verdicts

For years, trial lawyers—specifically, the plaintiffs’ bar—have treated truck accident litigation as their fast lane to pursue Jackpot Justice. By perverting civil litigation into a profit center to line their own pockets, they’ve created a climate of pervasive lawsuit abuse that’s upending the trucking industry and beginning to choke our economy’s supply chain.

Now, and for the first time, a new data-driven study is shedding light on the breadth and severity of this crisis. Data compiled by the American Transportation Research Institute show lawsuits targeting trucking have increased at an exponential pace, seen in both the volume of cases and the size of verdict awards. When evaluating verdicts in excess of $1 million, the average size increased from $2,305,736 to $22,288,000 – an increase of 967% – in the eight years between 2010 and 2018. 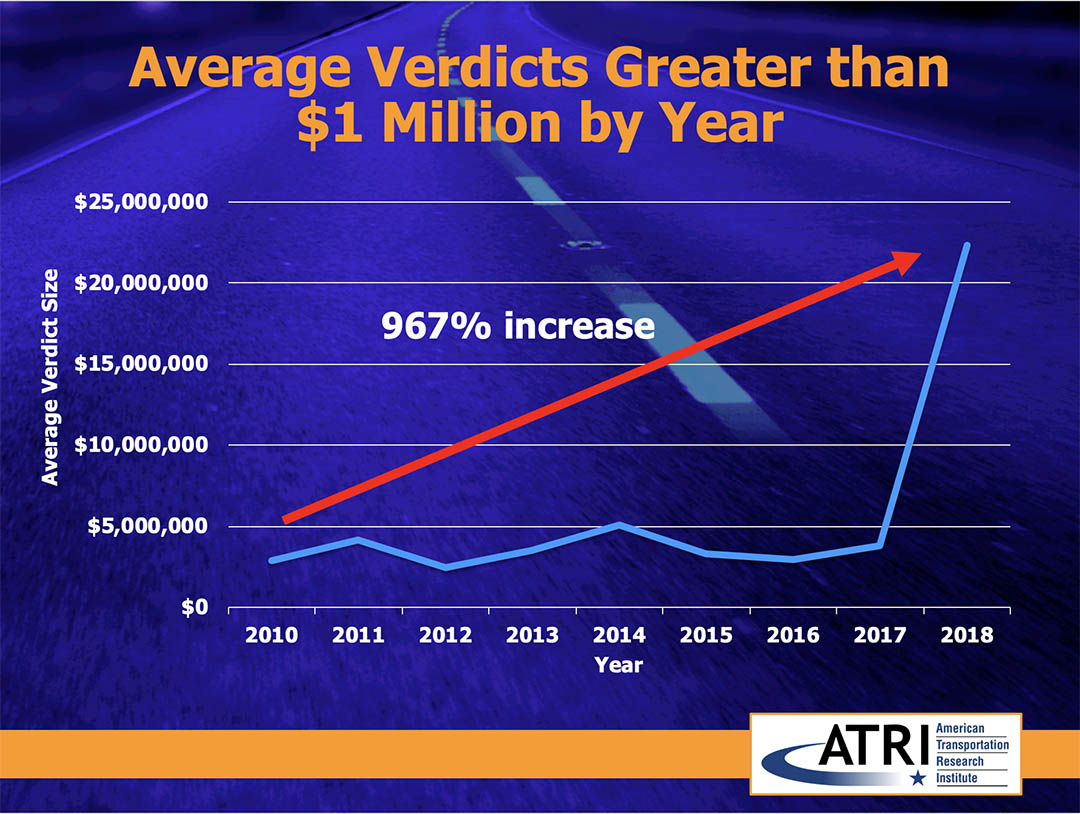 REPORT: Understanding the Impact of Nuclear Verdicts on the Trucking Industry

That meteoric rise isn’t tethered to any justifiable, economic reason. While standard inflation grew an average 1.7% per year and healthcare costs grew an average 2.9% per year, mean verdict awards saw annual increases of 51.7% per year over that same timeframe. So what's fueling this rise? The ATRI report identifies several inflection points along the historical timeline that’ve played contributing roles:

“Some believe the root of the increase stems from the 1977 U.S. Supreme Court case that re-allowed litigation advertising, and there is much merit to that assumption. The median dollar value of trucking litigation awards from 1985 to 1989 was slightly more than $100,000. And in the next five years, the average award increased by 90 percent to $190,000.

“There is also a theory that the initial ‘scalding coffee’ award of $2.7 million further raised the litigation bar in the minds of attorneys and juries, as both the number and size of verdict awards grew annually at double-digit rates.”

Another factor: a massive influx of third-party funding. Investment bankers and shady financiers from around the globe are getting in on the action. Treating civil justice like a speculative commodity, these sharks will front the litigation costs of a prospective lawsuit in exchange for a slice of the nuclear verdict pie or settlement, enticing more frivolous filings and often netting themselves a massive return on their investment. And this is not some niche practice; Third-party litigation finance is now a $400 billion global industry, with the largest market being the United States.

The exponential rise of nuclear verdicts—which ATRI defines as those in excess of $10 million–can’t be attributed to a single causal factor, but the numbers undoubtedly reflect an unbounded system being driven up without any restraint. The plaintiffs’ bar is highly adept at leveraging rules that create an uneven playing field for the defendant, using tactics proven to achieve their desired outcome irrespective of the given facts in a particular case.

One such tactic is known as the “reptile theory,” in which plaintiffs’ attorneys use emotional appeal to inflame jurors into a sense of moral obligation. This compels the jury on a base level to render an outsized verdict in order to send a "broader message" that speaks to issues beyond the proximate cause of the particular accident under examination.

This approach was illustrated in a recent, notorious case from 2014. A pickup truck carrying a Texas family lost control in icy conditions while driving down a divided interstate. The pickup veered through multiple lanes, careening all the way across the grassy median and into oncoming traffic, before spinning out in the direct path of a tractor-trailer. Tragically, a seven-year-old died and a 12-year-old was left paralyzed. The truck driver was not cited for any violations by the responding officers, as he was traveling well below the posted speed limit and did not lose control of his truck—managing to bring it to a controlled stop after the collision, which prevented any secondary accidents and further loss of life.

Despite these facts—none of which were in dispute—the jury issued a nearly $90 million verdict against the trucking company after a civil lawsuit was filed. The plaintiffs’ attorneys argued the case goes “beyond the actual accident per se” – if the trucker had not been on the road to begin with, perhaps a collision could have been avoided, or so the thinking goes.

It can challenging to go one mile along Louisiana Interstate without seeing lawsuit solicitations like this one (Source: LMTA)

By pointing to factors outside the scope of the actual underlying accident – such as a motor carrier’s involvement in other crashes or its high rates of employee turnover – plaintiffs’ attorneys will persuade jurors that a nuclear verdict is necessary in order to bring about wider reforms. They’ll tell the jury that, in response to a tragic loss of life, jurors have been given an opportunity to bring about meaningful change.

Jackpot Justice: But Who Really Pays?

The plaintiffs’ bar contends nuclear verdicts are an effective tool to hold bad actors accountable. But the truth is they have a broad and indiscriminate impact, with costly consequences that range far and wide.

Lawsuit abuse has sent shockwaves through the insurance market, sending rates soaring with double-digit increases year after year. All motor carriers – regardless of their size or safety record – are being squeezed hard by skyrocketing premiums, taking away from safety budgets and other critical program expenses like driver training. This in turn has triggered a tidal wave of bankruptcies across the industry, destroying many good-paying jobs that support families.

“Not surprisingly, insurance rates have increased at similar rates as litigation awards. Over the last 2 to 5 years, commercial truck insurance premiums have increased annually between 35 percent and 40 percent for low- to average-risk carriers according to the expert surveys.”

The insurance crisis isn’t contained to commercial vehicles either. Lawsuit abuse increases insurance rates for all motorists, anyone who drives a car. Louisiana—one of the most egregious jurisdictions in the country for frivolous litigation—has some of the highest premiums nationwide. According to LA Insurance Commissioner Jim Donelson, the kind of accident fraud seen in the LaBeaud scheme adds an annual $600 to a family’s car insurance costs.

All of this puts upward pressure on the costs of transportation across the economy. For consumers, this means higher prices at the store and delayed deliveries. For businesses, it means higher operating expenses. While the plaintiffs’ bar profits off the system, the cost of living for everyone else goes up.

The Case for Reform

When a motor carrier acts wrongfully, and that wrongful conduct injures those with whom we share the roads, we believe that motor carrier should be held accountable and those injured should be fairly compensated. But our industry will not roll over as dollar-chasing trial lawyers try to shake down our trucks as if they are their personal piggy banks.

In February of this year, leadership from the American Trucking Associations and the Louisiana Motor Transportation Association met with Governor John Bel Edwards at the governor's mansion in Baton Rouge to discuss the severe impact that lawsuit abuse is having on the industry. That discussion helped lay the ground work for a legislative victory scored last week, as the state legislature passed a comprehensive tort reform bill that the governor intends to sign into law.

“For years, the plaintiffs’ bar has perverted the civil litigation system into a profit center to line their own pockets."

The Civil Justice Reform Act of 2020 addresses many flawed rules that the Louisiana plaintiffs’ bar relies on to perpetuate their campaign of lawsuit abuse. It repeals the “seat belt gag rule,” which prevented the defense from introducing evidence that the plaintiff was not wearing a seatbelt and contributed to their own injuries. It decreases the threshold to request a jury a trial from $50,000 to $10,000. The plaintiffs’ bar depended on the higher threshold to “judge shop” – allowing them to pick venues they knew most likely to result in their favor. The law also brings allowable medical damages more in line with what the plaintiff actually paid – rather than what was billed by the healthcare provider.

This bill isn't a silver bullet, but it does take concrete steps to restore balance and fairness to the system in Louisiana and level back the playing field for the trucking industry. Moreover, it provides a model of success that our industry will pursue in other states and jurisdictions where lawsuit abuse is prevalent. Governor Edwards deserves much credit for taking this issue on and seeing it through to completion, working in good faith with legislators and all stakeholders to find common ground and reach an agreeable, compromise solution. Other governors would be wise to take notice and follow his lead.

America’s trucking industry employs more than 7.5 million hardworking men and women across the country—many of who have been serving on the frontlines throughout the COVID-19 pandemic, putting themselves at risk in order to ensure everyone else is provided the essentials of everyday life.

In just 10 days, July 20-24, the Virtual Trucking Legal Forum will cover topics not just on litigation issues but negligent hiring, data privacy, cyber security, intellectual property, business continuity, regulatory investigations and audits, the unique issues impacting intermodal operations and specialty motor carriage. There is something for everyone on the agenda. Register now.