The Bipartisan Infrastructure Law is delivering for truck parking

Federal funds from the Bipartisan Infrastructure Law are rolling in for crucial truck parking projects across the country. In recent days, Florida and Tennessee were awarded a combined $37,600,000 in INFRA grant funding to expand their truck parking capacity -- with more states sure to follow. 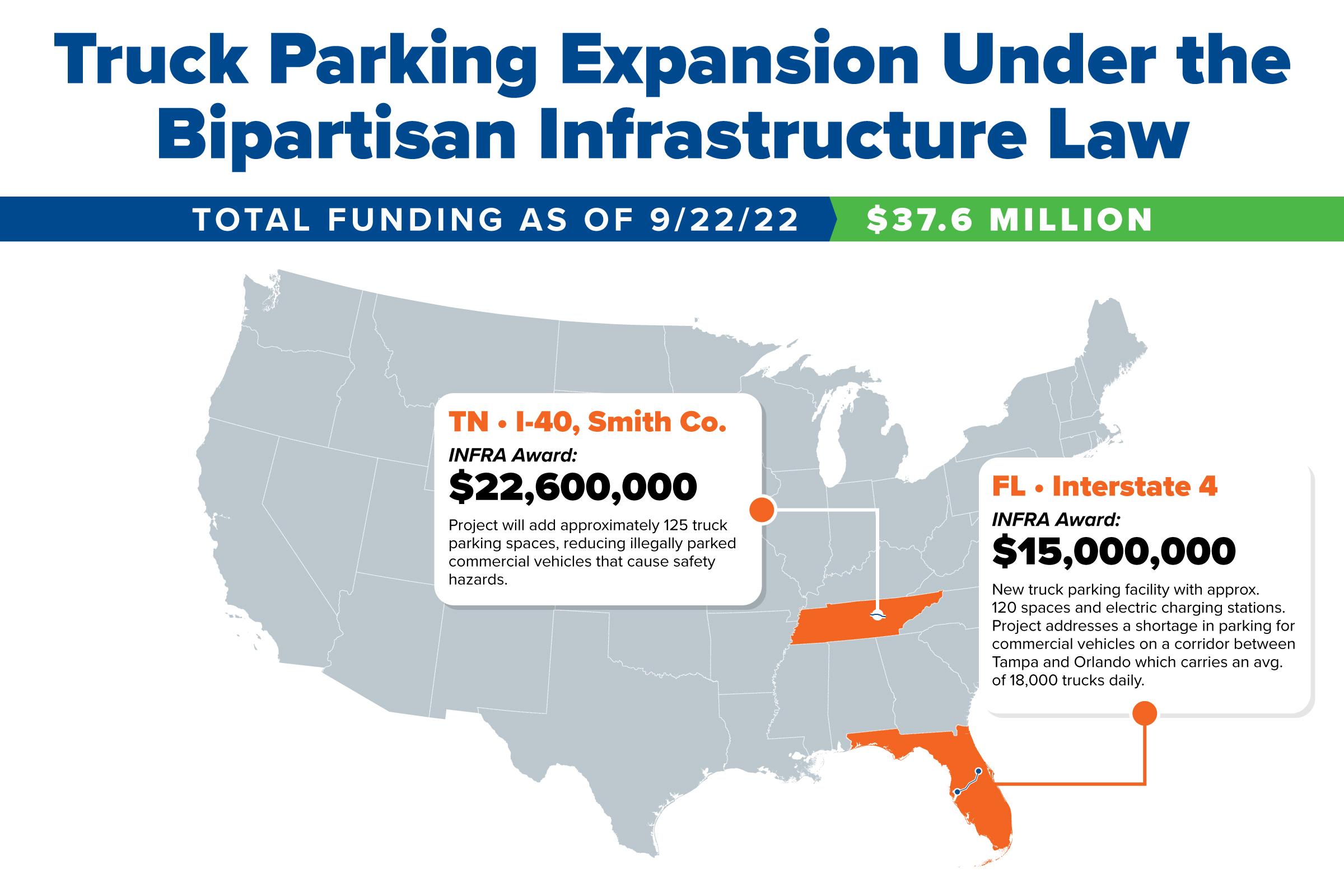 Why it matters: A severe shortage of commercial truck parking nationwide is having dire consequences for highway safety and supply chain efficiency. When truck drivers are unable to find safe, authorized parking, they're stuck in a no-win situation -- forced to either park in unsafe or illegal locations, or violate federal hours-of-service rules that regulate their daily drive-time in order to search for safer, legal alternatives.

ATA strongly supported passage of the Infrastructure Investment and Jobs Act because interstate commerce depends on robust federal funding to ensure we have the necessary infrastructure to keep freight moving safely and efficiently. While the final bill omitted funds specifically earmarked for truck parking, such projects are eligible for several of the law's sizable discretionary grant programs.

Earlier this year, we partnered with the Owner-Operator Independent Drivers Association on a letter to Transportation Secretary Pete Buttigieg urging the release of IIJA funds for truck parking:

Soon thereafter, Secretary Buttigieg made clear in testimony to Congress that funding for truck parking was a high priority for the Administration, and ATA is grateful to Secretary Buttigieg for delivering on that intention. Out of more than 4,000 applications for INFRA grant funding, the Secretary and his team selected these truck parking projects as two of only 26 nationwide to receive an award.

We also thank Governors Ron DeSantis of Florida and Bill Lee of Tennessee, as these awards began with an application from each state. Their DOTs took action, prioritizing truck parking amidst a long list of competing infrastructure needs in order to secure these funds on behalf of truckers. As the backbone of interstate commerce, trucking depends on governors who understand what truckers need to get their jobs done.

What comes next: We hope that more states will apply for truck parking awards through the IIJA. While the application window for Fiscal Year 2022 has closed, the Bipartisan Infrastructure Law is a five-year authorization -- meaning there will be more bites at the apple. In fact, the Department of Transportation just released new guidance for states on funding eligibility requirements for truck parking projects under the IIJA.

Furthermore, state and local governments can use the sizable federal highway formula funding they will receive from the Bipartisan Infrastructure Law to expand and improve truck parking facilities.

Congress also has a critical role to play by passing the Truck Parking Safety Improvement Act, which was introduced by Reps. Mike Bost (R-Illinois) and Angie Craig (D-Minnesota) last year.  The bill would authorize a new competitive grant program specifically for truck parking, dedicating $755 million over four years for projects including capacity expansion and enhancements like lighting, restrooms and other security features.

👏 There is no better way to #ThankATrucker than to ensure America’s highway heroes have safe and accessible places to park, with the federal funding resources necessary to get those projects built. Thank you for continued leadership on this critically important issue! https://t.co/hnfoetTvwk