Bipartisan Infrastructure Bill is a win for American truckers and the U.S. supply chain

On May 11, 2021, transportation officials conducting a routine inspection of the I-40 Hernando de Soto Bridge between Arkansas and Tennessee discovered a potentially catastrophic crack in the structure’s primary support beam. What followed was a three-month shutdown of a critical passageway along one of the country’s most vital freight corridors across the Mississippi River, connecting markets on both the East and West Coasts.

The closure of the I-40 bridge, which typically carries more than 40,000 vehicles per day, caused a massive disruption in the flow of people and goods. The more than 12,000 trucks that cross it daily saw their average transit time increase from eight minutes to 76 minutes, costing the industry $2.4 million for every day the bridge was closed. By the time it reopened on July 31, a few feet of cracked steal on a public bridge had directly cost the U.S. trucking industry upwards of $200 million. 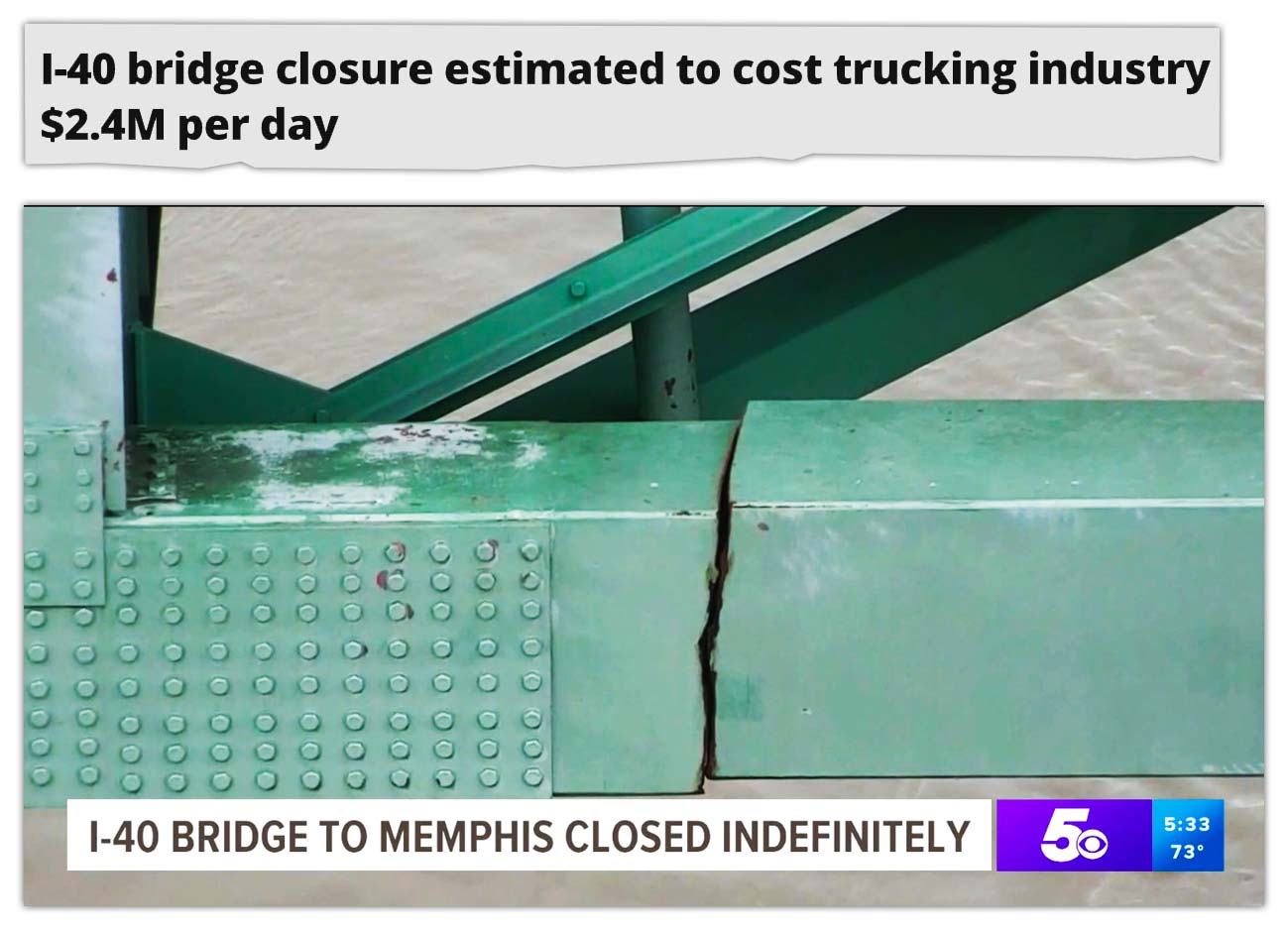 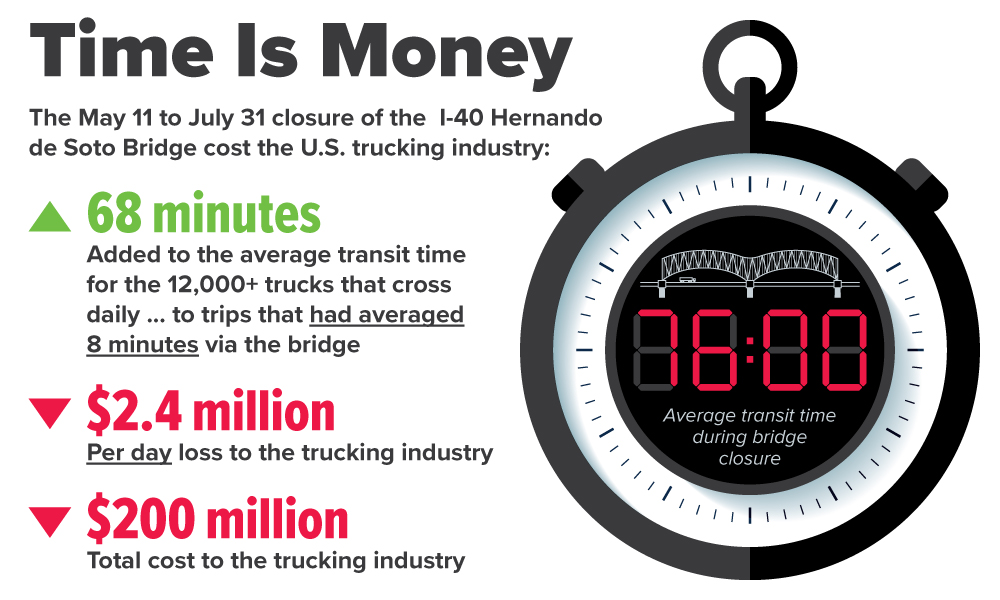 This episode wasn’t some isolated blemish on our nation’s infrastructure. Rather, that crack was the latest symptom of a National Highway System approaching the advanced stages of decline. Of the 617,000 bridges across the U.S., 42% are more than 50 years old, and more than 46,000 of them are structurally deficient. Our roads fare no better. Of the four million miles of public roadway, 43% are in poor or mediocre condition. 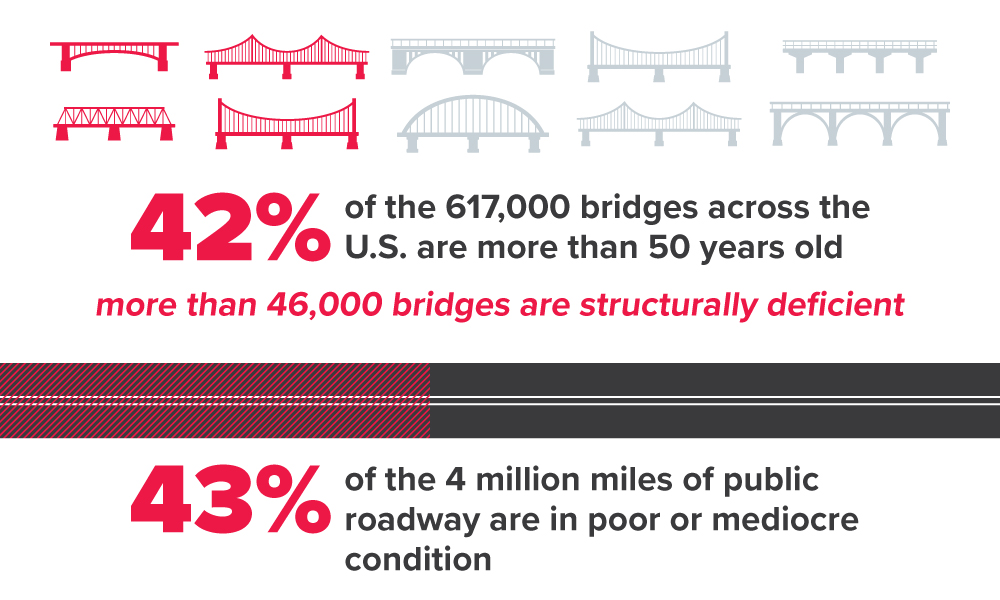 For an industry whose entire business model centers on interstate commerce and the safe and efficient movement of freight over the road, this state of decay carries consequences not fully conveyed by worn political rhetoric about “crumbling infrastructure.” Rather, the consequences are best captured in the real, measurable and rising costs borne directly by motor carriers as the system breaks down.

Traffic congestion created by worsening freight bottlenecks in every region of the U.S. amounts to 1.2 billion hours of lost productivity annually for the trucking industry – the equivalent of 425,533 commercial truck drivers sitting idle for an entire year. That lost time and excess fuel burn measures out to $74.1 billion in added operational costs. It causes an additional 67 million metric tons of CO2 emissions from trucks to be released into the atmosphere. 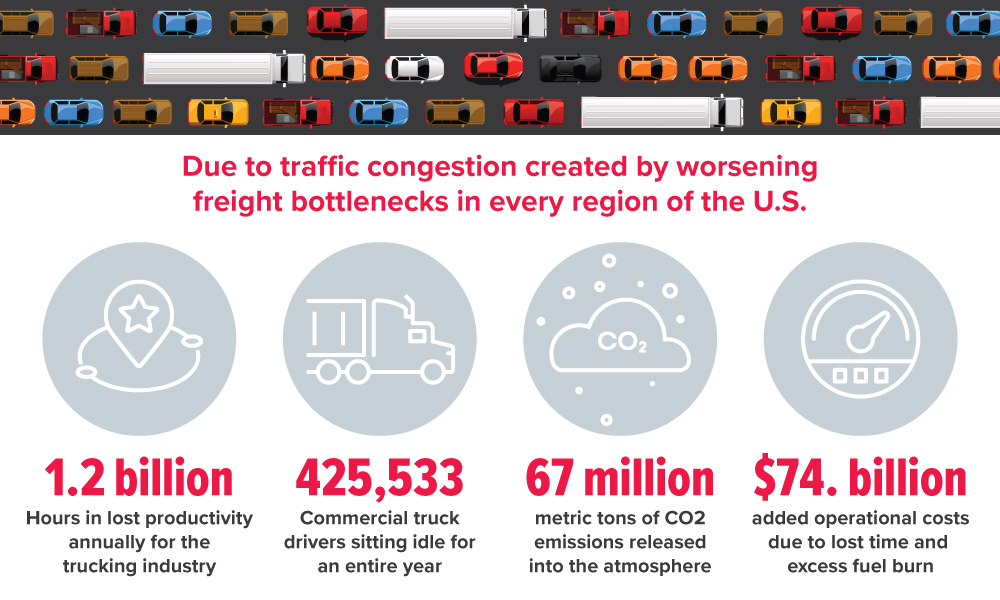 As illustrated by the I-40 bridge, each passing day continues to bleed trucking’s bottom line.

These breakdowns in the National Highway System are clogging our nation’s economic arteries—and with far-reaching consequences. Localized freight bottlenecks don’t just choke their surrounding metro areas. Disruptions to freight corridors have a pervasive regional impact, affecting supply lines, markets and individuals thousands of miles away across many states.

How did we get here? This predicament is the result of decades of neglect and underinvestment on the part of elected officials in Washington, D.C. and state governments across the country. For years, our country and industry have been held captive by empty promises. All talk, no action.

And while the infrastructure beneath us falters, the freight demands placed on trucks continues to grow exponentially. As we look over the horizon—absent a substantial increase in federal infrastructure funding or significant hikes in freight charges—our industry won’t be able to sustain the thin operating margins that the business of trucking survives on.

Out of partisan paralysis comes a bipartisan achievement.

Nothing comes easy in Washington these days. Congress is driven by crises and deadlines. Tribal, partisan warfare makes achieving anything of substance nearly impossible. This is the landscape we’re dealt. In this hyper-polarized political climate, successful advocacy must embrace the art of the possible.

The Bipartisan Infrastructure Bill in Congress, which cleared the Senate with broad support from Republicans and Democrats, now awaits action in the House. It is not a perfect piece of legislation—no bill is. Totaling $1 trillion, the package is a far cry from the $2 trillion+ that former President Trump repeatedly called for. Yet despite having control over both chambers of Congress and the White House, Republicans failed to introduce a bill, let alone move one. They had their shot, and they blew it.

"For years, our country and industry have been held captive by empty promises.

All talk, no action."

Now it’s the Democrats’ turn. The current bipartisan bill would represent the greatest investment in highways and bridges that our nation has ever seen. The bill authorizes $477 billion in new funding over the next five years for surface transportation programs, including $347.5 billion for highways — a 38% boost above the baseline levels set in the last highway reauthorization bill, the FAST Act. It also provides $37 billion for bridges — the largest infusion of federal funding into our nation's bridge network since the formation of the Interstate Highway System. 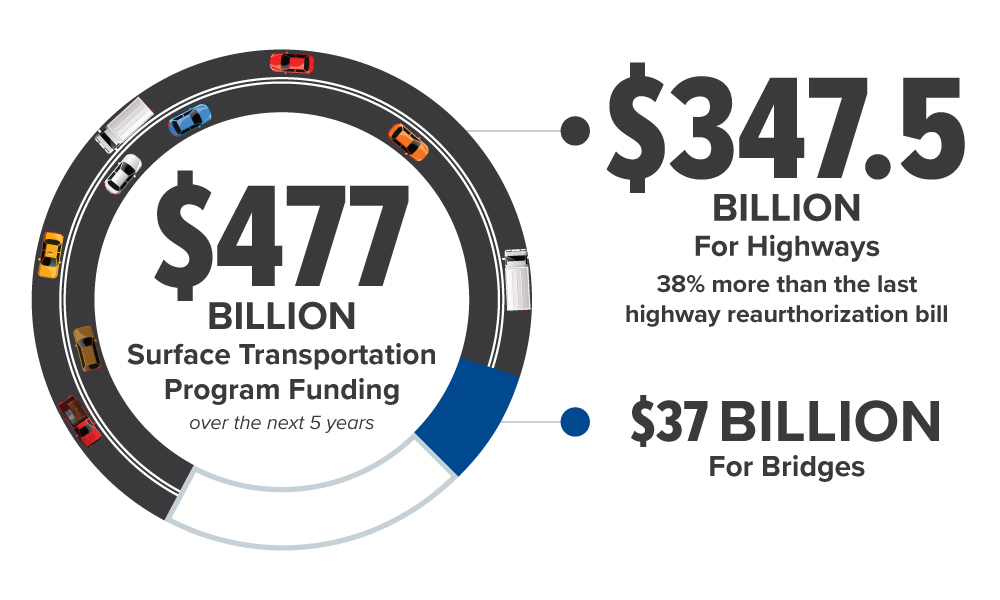 While most funding would be distributed to states by formula, a significant amount of money would be disbursed through grant programs, including:

The bill also includes crucial workforce development provisions for our industry. It would establish a three-year, national pilot program based on the DRIVE-Safe Act, authorizing up to 3,000 18-20-year-old drivers at any one time to undergo advanced safety training in order to participate in interstate commerce. It also establishes a Women in Trucking Advisory Board for the Federal Motor Carrier Safety Administration, and it funds a Department of Transportation advertisement campaign to promote workforce needs in trucking and other transportation sectors.

Equally important is what’s not included in the bill. While legislators on the far left pushed for them, we fought successfully to keep harmful, anti-trucking measures out of the package, such as labor provisions from the PRO Act, independent contractor reclassification, a rollback of meal and rest break preemption, hours-of-service reform rollbacks and a return of the flawed CSA scoring program back to public view. And although some Republican Senators sought to fund the bill solely on the backs of truckers by instituting a truck-only Vehicle Miles Traveled tax, we fought successfully to prevent that from being included as well.

Keep in mind that trucks make up just four percent of the vehicles on our nation’s highways, yet we pay nearly half the tab into the federal Highway Trust Fund—all while moving 71 percent of the domestic freight tonnage. That’s more than all other transportation modes combined. And we’re proudly on record stating our willingness to pay more with other road users, because we understand that the return on infrastructure investments far outweigh the $1.2 trillion proposed in this bipartisan bill.

A Foundation for Growth

The net result of this legislative process is a solid bill focused largely on core infrastructure – roads and bridges – void of extraneous, controversial social spending measures, and free of punitive funding provisions and other costly mandates targeting our industry.

"The Bipartisan Infrastructure Bill will not only protect trucking’s bottom line, but it will ensure the United States has the foundation it needs to compete and lead in the global economy for generations to come."

These investments will reverberate throughout the economy. Despite the multi-modal options available to commuters, travelers and shippers today, roads remain the predominant means for how we move people and things. A full 87 percent of passenger miles happen on the highway. More than 11.8 billion tons of goods, valued at $10.4 trillion, move by truck across these highways. All other modes—air, rail, transit — often depend on road networks for either the first mile or the last, or to even function at all.

For anyone treating this bipartisan bill as a zero-sum political game, question their motive. Who do they care more about—us, or themselves? This bill is squarely about our nation’s future. The trucking industry is the heartbeat of our country, and we now employ more than eight million of the hardest working, most patriotic men and women in the United States. It should not shock anyone that our industry stands with those willing to put America first.

These investments could not come at a more critical time, as the Highway Trust Fund teeters on insolvency and we fall woefully behind our adversaries. For years, China has been making investment in transportation and trade infrastructure — within its borders and beyond — a top priority. Whereas policymakers in Washington for decades have treated U.S. infrastructure as a problem for future generations to deal with, Beijing has long seen the infrastructure gap as a strategic opportunity to seize upon.

Thirty years ago, there were no highways in China. Today, its national highway network spans more 100,000 miles — more than any other country in the world. And they are not slowing down: They now plan to extend their highway network by an additional 47 percent by 2035.

The COVID-19 pandemic underscored the paramount importance of maintaining a strong and resilient supply chain, and that works begins with reinforcing our physical infrastructure. The Bipartisan Infrastructure Bill will not only protect trucking’s bottom line, but it will ensure the United States has the foundation it needs to compete and lead in the global economy for generations to come.

This bill is good for public safety, the environment, jobs, our industry and for America’s economy and competitive advantage over China and any other growth-minded nation. For those reasons, it has our unwavering support.