Leaders from the moving and storage industry recognized the numerous contributions of Dan McCollister and the personal connections he made to so many across the industry. 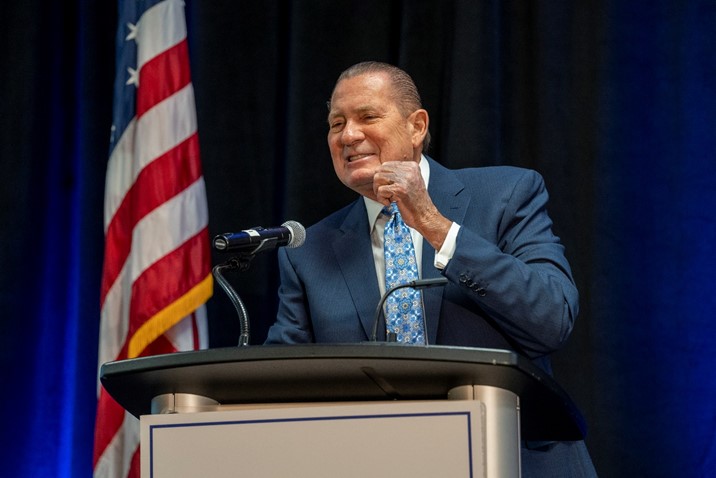 Dan was always the most authentic and open person and has helped me many times over the 30 years that I have known Dan . Always someone you could count on for their opinion, insight, and help. He will be missed.

Dan was an iconic figure in our industry. His leadership of the McCollister Transportation Group has positioned them as a market leader in the moving, storage, and logistics arena. Dan also held the position of Chairman & CEO of UniGroup, Inc. for many years and his contribution to the UniGroup organization is incalculable. He will be greatly missed.

Dan McCollister was simply one of the most significant leaders in our industry.  His unwavering commitment and passion for excellence is legendary, and he always placed the customer at the top of the McCollister and UniGroup organizations.  Dan was a dear friend, a mentor, a servant leader who understood to be an effective leader you had to have others to follow your lead.  He truly cared about everyone who shared his passion for service excellence, and he rewarded this loyalty with unconditional love and respect.

Dan spent his unparalleled professional career building one of the largest and most successful transportation and logistics companies in our industry.  With an “earned, not given” mantra, winning results mattered to Dan and they were foundational, at both McCollisters Transportation and throughout his forty-years of leadership at UniGroup as a Board member, Vice Chairman and as our Chairman for twelve years.

He was genuine, caring, tough, fair, accountable, and above all he loved making a difference in the lives of people who he cherished and who cherished him.  Fortunate to be one of those many people, I will forever be grateful to Dan McCollister.  God Bless you Dan and rest well knowing your legacy will last forever,

I was both shocked and saddened to learn of Dan’s passing.  I have known Dan for nearly 40 years serving with him for 12 of those years on the UniGroup Board of Directors.  Dan was a mentor to me in many ways as I followed him as Chairman of that board.  Dan is an industry icon whose passion for the moving and transportation industry was unparalleled.   Dan built a dynamic organization with world class service and was a fierce industry competitor.  He will be greatly missed by his family and the many friends he developed over his 50+ years in the industry.

Dan was a truly singular human being. You knew he was in the room whether you saw him or not. He had a commanding presence that could be intimidating at first glance. But if you a had the chance to  speak to him, to know him, that polished curtain would quickly open to reveal one of the most authentically warm, interested, curious, and kind people you could ever meet.
Dan was a born leader who inspired confidence in all those who worked with him. He was a tenacious entrepreneur who demanded the best from everyone in his organization, and he led by example. He was all-in, decisive, and persuasive. His competitive nature, business acumen, and persistence in pursuit of excellence is legendary. He outworked everyone in his massive organization and will be remembered as one of our industry’s most innovative, astute, and effective leaders.

You never had to question where you stood with Dan as his directness and refreshing candor left you keenly aware of how he felt. He had a unique ability to connect with people because he actually paid attention when he spoke to you. He always remembered people’s names and had a larger-than-life personality. His sense of humor was smart and insightful, and he was always focused on what was important. So it’s no surprise that he also did not suffer fools and had zero tolerance for the a-holes. (If you knew Dan, you’d know that was an uncensored word when he spoke it!)

It’s my honor to say he was more than a colleague; he was a friend. I always walked away energized after speaking with Dan. He expressed genuine interest in how my business was doing. He never asked a half-baked question; it was always probing. He loved to talk shop and discuss our industry, even the nonsense, and how we need to fix it. But he always went beyond to get to the heart of what it’s like to be a business owner. He would speak to me about my children, about how they were doing and how I was preparing them to run the business one day. He was so generous with his words and time when he would see them at industry events and I’m grateful they got the chance to experience the Dan McCollister magic.